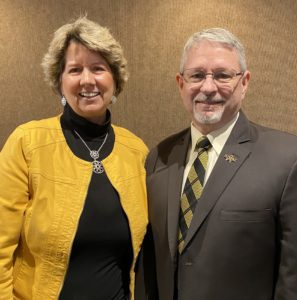 Chuck and Susan are exited to begin the next phase of their ministry by joining the AFBM family. They look forward to being a part of the life changing work of reaching current and former service members and their families with the Gospel and Bible based preaching and teaching.

Chuck grew up in a family that was morally good but did not attend church. After high school, he joined the U.S. Army, completed his three-year commitment then returned to Ohio and joined a reserve unit. During that time, he met and married Susan. Chuck missed the military, reenlisted, and was sent to Fort Bliss, TX then West Germany.

Susan grew up going to many different types of churches and attended Catholic high school. Her parents thought sending her there was better than public high school. After marrying Chuck and moving to Germany, Susan felt a strong desire to take their two-year-old daughter Heather to church. After finding a tract, Susan packed up her family and went to Lahn Baptist church in Giessen, West Germany. Chuck was 29 years old when he was exposed to the Gospel for the first time. During a visit from the pastor on 29 May 1986, Chuck turned his life over to Jesus Christ and accepted Him as his Saviour. Susan also came under strong conviction and accepted Jesus Christ as her personal Saviour. Chuck is privileged to have been discipled and mentored by many pastors and was always willing to serve wherever he was needed.

After serving in military churches overseas and stateside, while at Fort Polk, LA, Chuck and Susan were called to the minister to the U.S. Military in the country of Japan. After twenty-one years of military service, Chuck retired. In 2002, Chuck, Susan and their six children arrived in Japan. After arriving, they served at Camp Zama, NAF Atsugi and Yokota Air Base. In 2014 Chuck felt the call to Okinawa and in 2015 started Lighthouse Baptist Church in their home. In 2021, God started closing the doors to Japan and began opening doors for Chuck and Susan to serve with AFBM.

Chuck has served in many capacities, including Usher, Sunday School teacher and Youth Pastor. He received training through local church Bible institutes and completed his degree at Andersonville Baptist Theological Seminary.

Susan has a servant’s heart and desires to be a blessing to everyone she meets. She taught Sunday School and was instrumental as a Youth Pastor’s wife, many times picking up the slack when Chuck worked long hours or was deployed. As a Pastor’s wife, she continued to grow and serve while homeschooling six children.