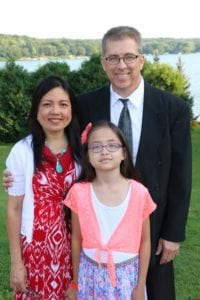 Bruce was not raised in a Christian home. While a senior in high school, a co-worker who was a student in Seminary gave Bruce a clear presentation of the gospel and so he called on Christ to save him. He joined the Marines just months after that. From 1987 to 1989 he was discipled by a missionary to the military in Okinawa. After the military, Bruce went to college and met Monette. They married shortly after and Bruce entered the business world. They served in their local church in children's ministries, Sunday School, and outreach. They desired to serve as full-time missionaries, somewhere. Bruce started Seminary in 2014. During that time he met Jon Schrock and Paul Phelps. Their burden for the military became his and the Clingamans joined AFBM. God confirmed with them and the board that returning to Japan where Bruce served as a Marine was where God wanted them as missionaries.

• Born in Peru, IN
• Bachelor of Arts in English
• Master of Arts in Sacred Theology
• Marine Corp veteran from 1984 to 1990
• Worked as IT professional from 1999 to 2018
• Serving in nursing home ministry
• Trained PTSD counselor

Monette grew up in a small town in the Philippines. She was raised by her grand-uncle and aunt. Her grand-uncle was faithful to take Monette and her sister to Protestant church. After high school she moved to Manila to attend college. It was there her roommate confronted her about her salvation. She realized she had been trusting in her church attendance to earn salvation. She trusted Christ there. After college, she moved to Subic Bay Naval Base to live with her mom and step-dad. It was there she learned the value of the servicemen's center. She watched the missionary there reach lost servicemen and disciple them faithfully. When Mount Pinatubo erupted in 1991 her family was evacuated to Boston where she met Bruce. They married a year later in Indiana where Bruce was earning his undergraduate degree.