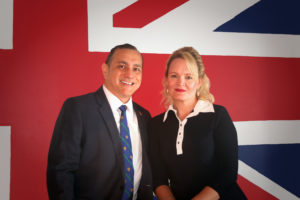 Scott and Tammy McCain joined Armed Forces Baptist Missions in 2018 after years of service in an assistant pastorate and Christian school ministries. Scott accepted the call to pastor Faith Baptist Church in Lakenheath, England, established for the purpose of ministering to U.S. Air Force bases in Lakenheath and Mildenhall.

Although he made a profession of faith at eight years of age, Scott was saved on August 27, 1989, as a freshman at Bob Jones University. Five months later, he surrendered to God’s will for his life and full-time Christian service.

Tammy grew up in the same small Upstate, S.C., town and was led to the Lord by Scott in 1991. The couple was married in May 1994 and began serving the Lord in Christian school ministry a year later.

Scott, the son of an Army Vietnam veteran, most recently served as the assistant/youth pastor at a church in Chesapeake. Tammy worked as a teacher’s aide in a Christian school in Portsmouth until joining Scott on full-time deputation in 2020.